By caledonia December 7, 2015 Uncategorized
No Comments 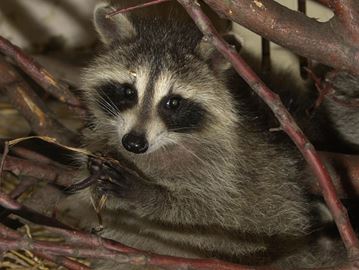 At least four people are being treated after having direct contact with a rabid raccoon in Hamilton.
Hamilton Spectator
By Natalie Paddon

What is rabies?Rabies is a disease that affects animals nervous systems.
How can it be passed?
Through a bite or scratch — a break in the skin — from the infected animal.
How is it treated?
The rabies vaccine usually is given in five needles in the arm over a month.
What are the types of rabies in Ontario?
Fox strain, raccoon strain and bat strain.
What are the symptoms of rabies?
Infected animals could lose their fear of humans, become paralyzed in their hind limbs, salivate, show aggression, isolate themselves, have a drooping head/sagging jaw/abnormal facial expressions and vocalizations as well as bite their own limbs.
What are some tips from Public Health?
Vaccinate cats and dogs. Supervise pets in areas near wild animals. Don’t treat wild animals as pets. Call Animal Services if you suspect a pet is sick. If a person is bit by an animal they suspect is sick, seek medical attention.
Who to call about sick wildlife?

Contact Public Health Services at 905-546-3570 if it’s believed there is a health risk from the animal.

At least four people are being treated after having direct contact with a rabid raccoon in Hamilton.

It all stems from a fight between two bullmastiffs and a raccoon — which later tested positive for rabies — inside a city animal services van.

Paula Fancey, who owns the bullmastiffs named Lexus and Mr. Satan, said she received a call from the Ontario Ministry of Agriculture, Food and Rural Affairs (OMAFRA) Friday notifying her that the raccoon had rabies.

Fancey said she and her daughter, Jordan, are also going to get the shots because they came in direct contact with the dogs.

The rest of her family — her husband and two children, ages 13 and 16 — will go to their family doctor to be assessed to see if they require treatment as well, she said.

Public health said officials don’t believe there is any risk to the general public at this point.

The only people believed to have had direct contact with the sick animal are the workers, Fancey and her daughter, said associate medical officer of health Dr. Julie Emili.

As of 7:30 p.m. Friday, Emili did not believe health officials had been in contact with those who called about the raccoon, but it’s possible they could be treated as well.

“It is a serious situation to have a case of rabies in a raccoon,” she said. “It’s unusual.”

In Ontario, there hasn’t been a documented case of rabies in a raccoon for nearly 10 years, Emili added.

The dogs came in contact with the raccoon after they were picked up and placed in crates inside the city van when they were seen running loose in the neighbourhood around their Province Street North home.

The raccoon was also inside the van and was being transported to the city’s animal shelter to be euthanized, city spokesperson Ann Lamanes previously said.

Jordan, who was there at the time, said Lexus had scratches on his face, a split tongue and bloody marks inside the mouth after breaking free from the cage. Mr. Satan remained in the crate but had gouge marks on his chin and side, she noted.

The city has said the department is reviewing protocols and equipment in vehicles since the incident.

Moving forward, animal services was scheduled to pick up the two dogs from Fancey Friday night to hold them in quarantine for two days until next steps are determined.

Fancey said her vet advised her the dogs will have to remain in quarantine for three to six months. She said she does not know if her dogs have been vaccinated against rabies.

“To be honest with you, I’ve had so many trips to different vets, I can’t remember.”

She’s going to take the weekend to mull over what she’ll do. She said she’s considering putting the dogs down because of the health risk.

“This is devastating for us,” Fancey said. “I don’t want to lose them.”

When our clinic is closed, Mohawk Animal Clinic at 962 Upper James St. will be open for emergencies until 10 pm. Their phone number is (905) 389-2286 If your emergency is after 10pm please contact the Hamilton Region Emergency Veterinary Clinic at 905-529-1004